Year in Review: Learn about Vista’s investments and key milestones in 2021. READ HERE

Insights / An Introduction to Immersive Technologies

An Introduction to Immersive Technologies

Definition and Types of Immersive Technology

AR relies on processors, a display, sensors and input devices to create an experience. There are four types of AR:

VR systems use head-mounted displays and input devices to provide a sense of immersion. Head-mounted displays cover the user’s field of view to display computer-generated content. Input devices such as joysticks, tracking balls, controller balls and data gloves allow the user to interact with the virtual environment. Just like AR, there are different types of VR for different use cases:

1957: Immersive technology for recreational purposes was brought to the fore with the invention of Sensorama. This cinematic experience, developed by Morton Heilig, placed the viewer in a “sensory” theater that included speakers, fans, smell generators and a vibrating chair to immerse the viewer in the movie.

1968: The Sword of Damocles was the first VR head-mounted display connected to a computer rather than a camera. It is the blueprint for VR headsets seen today.

1991: Sega launched the Sega VR headset at the Consumer Electronics Show for arcades and home use. However, only the arcade version was released due to technical difficulties.

1992: The development of AR picked up when Louis Rosenberg created Virtual Fixtures, the first fully-immersive AR system, for the U.S. Air Force. This invention used two robot controls in an exoskeleton to enhance operator performance of manual tasks within remote environments.

1998: Sportvision developed the virtual yellow line so that NFL viewers could see the line of scrimmage and first down line while watching football games on television. This was the first time AR was introduced to a large audience.

1999: Hirokazu Kato developed the ARToolKit, an open-source library for the development of AR applications. This allowed developers to begin experimenting with AR technology and release applications incorporated with AR.

2016: Pokémon GO brought AR gaming to a mass audience. The game was one of the most used and downloaded apps in App Store history, with upwards of 500 million downloads by the end of 2016.

Most investment in immersive technologies has occurred in the gaming industry. Since Oculus Rift, many gaming companies have created VR games. One of the most popular games, Beat Saber, sold 1 million copies in just nine months. Healthcare has also been at the forefront of immersive technology adoption – already, surgeons are using AR headsets to visualize where to make incisions on the body and pull up patient’s health information during operations. In education, AR is allowing students to visualize text and interactive elements in lectures. Similarly, Google Expeditions enables students to go on “field trips” without leaving the classroom.

Companies are using VR to train workers, enhance creativity when designing products and collaborate with coworkers in different offices. In marketing, companies are implementing VR to enable the consumer to interact with products without having it in their hands. The defense industry has also been working to implement immersive technologies. VR is used to train soldiers in a virtual environment that mimics real-world encounters, while AR is used on the battlefield and for mapping and communication. 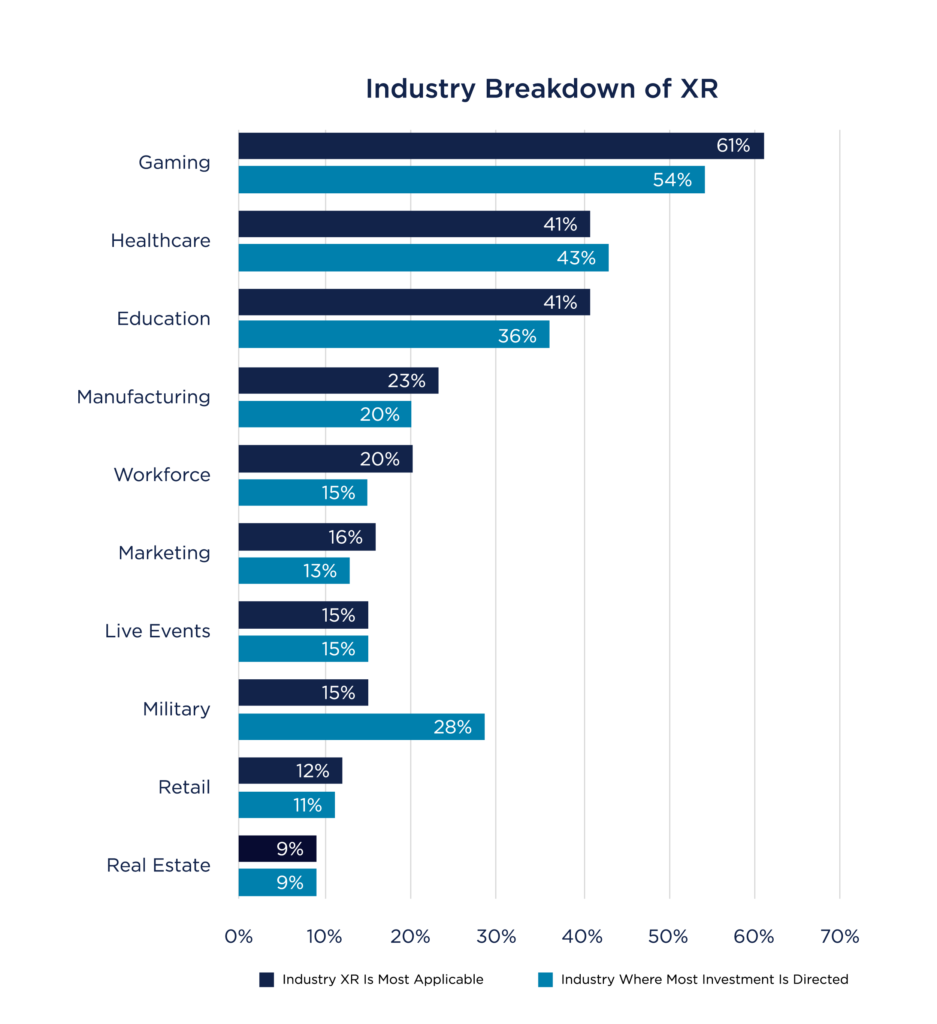 Solera, a leading provider of risk and asset management data for the insurance and automotive industries, developed an Intelligent Repair Estimator tool using immersive technology to generate 3D models of cars. This tool allows repair services and insurance appraisers to visualize the car, determine the severity of the damage and the cost to repair.

Investment peaked in 2017 and has since declined due to a lack of consumer demand, slow adoption of the technology, lack of established market, untested technology and a heavily competitive field. Data From The LA Times

One of the main challenges to adoption has been the user experience. Most headsets are too bulky, and technical glitches have been an issue. Lack of content has also been a challenge, with many companies unprepared for the initial surge in demand. The price of manufacturing content and hardware is still high, making some companies hesitant to enter the market. There are also legal implications. As with every unproven technology, users worry about privacy and data security. Privacy concerns include the potential for mass surveillance, eye tracking, fake identities and lack of security. Other risks include difficulty in licensing the technology and IP and potential infringement of third-party-owned IP. The Future of AR and VR

To date, business applications are showing more impact and near-term return on investment than consumer applications. But despite the challenges on the consumer side, experts believe that 5G will introduce a new wave for immersive technologies with more people downloading virtual content on the go. These technologies could be as ubiquitous as mobile devices by 2025.

This document is not for the purpose of soliciting investors for any Vista Fund. Under no circumstances should the information provided be considered an offer to sell, or a solicitation to buy, any security. While the information provided herein is believed to be accurate and reliable, Vista Equity Partners, its advisors and employees make no express warranty as to its completeness or accuracy. The metrics regarding select aspects of portfolio company operations were selected by Vista on a subjective basis. Such metrics are provided solely for illustrative purposes to demonstrate elements of such companies’ business, are incomplete, and are not necessarily indicative of the company’s performance or overall operations. The information provided is strictly confidential and may not be reproduced or disseminated to any third parties without the written consent of Vista. ©2020 Vista